Old Style Aloe Toxin Rid shampoo is one of the most popular hair detoxification  shampoos even if the high cost makes it less frequently purchased than other detox shampoos.  It has a long, legendary history. It was first produced by a company called Nexxus, a subsidiary of the giant Unilever corporation. It claimed to be able to detox heavy metals and other unhealthy toxins from the hair. Users looking to pass hair drug tests assumed this should mean it can also remove drugs from the hair and developed The Macujo and Jerry G. Methods to help with detoxing the hair. The Jerry G Method seems to have a verifiable story behind it. Apparently, Jerry G was a weed enthusiast on a popular message board who needed to get weed residues out of his hair. The Macujo Method, it’s not clear where it developed. Both methods are clearly being used to sell a very expensive shampoo; however, the Jerry G Method at least has scientific backing. The Macujo Method has theoretical backing but possibly contains potentially harsh ingredients. 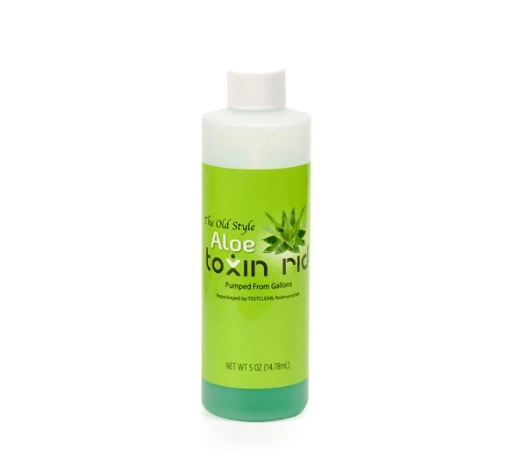 Anyway, people were using Toxin Rid and other detox shampoos with these two methods and apparently beating drug tests. However, Nexxus stopped selling the product. The reason why is not clear, but it could be related to them not wanting to be associated with weed users. They have a wide range of products and they are going to make lots of money with or without this one.

Discontinuing the product caused people to go online looking for old bottles, with such short supply and high demand, the price went up to as much as $ 250. Seeing an opportunity, some unscrupulous persons sold fake bottles, other companies made products with similar names. Finally, Testclear.com claims to have been allowed to reproduce the original formula, and they kept the price high, between about $ 199.99 to $ 235.00. It is often sold with Ultra Clean by Zydot (scientifically proven to remove around 30 % or more of THC residues).

It’s not clear if one ingredient in Old Style Aloe Toxin Rid provides superior detoxification. Some say the active ingredient is propylene glycol, others have claimed it is EDTA, a metal chelator. It may be a combination of ingredients, or it could be that it is just common shampoo ingredients when used with the aforementioned methods that are able to detox the hair of drug residues. The science is unequivocal that damage has to be caused to the hair shaft to get the drug residues out so if Aloe Rid is a superior hair detoxer, the supposed damage caused to the hair could be a reason Nexxus discontinued the product. 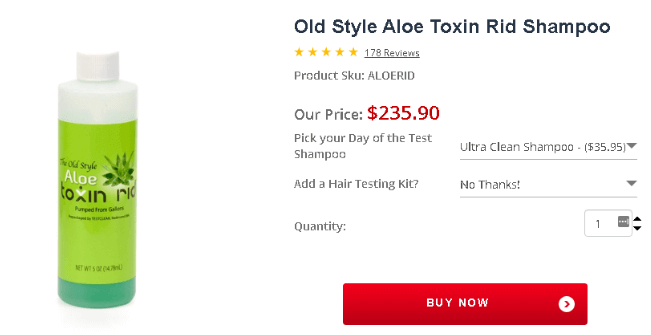 The Science of Using Aloe Rid Shampoo to pass a drug test (for detoxification of drugs like cannabis sativa):

As mentioned before, users use the Macujo Method and the Jerry G Method with Old Style Aloe Toxin Rid and Ultra Clean by Zydot. Is there any scientific evidence that these methods work?
A study published in The International Journal of Legal Medicine in 2000 called “Effect of the shampoo Ultra Clean on drug concentrations in human hair,” looked at this question. They took hair from 14 deceased known drug users. They tested half of each sample without washing with Ultra Clean and the other half after washing with Ultra Clean by Zydot. There were slight decreases in concentrations of each drug present after washing. There was no control. Ultra Clean did not put the drugs below the detection level. However, this study demonstrated that one washing of Zydot produced reductions of drug residues, including a reduction of 36 % for THC.[1] Repeated washing and/or using Zydot with one of the methods we will discuss can further reduce drug residues, hopefully below the level of detection.

A 1997 study in The International Journal of Legal Medicine called “Influence of the cosmetic treatment of hair on drug testing,” tested bleaching and dyeing on drug residues in the hair. They compared treated and untreated hair from each participant. They found decreases in detectable drug residues in every case of treated hair:

Bleaching produced greater reductions in detectable drug residues than dyeing. This is validation for the Jerry G Method, which requires both bleachings then dyeing, twice, then using baking soda (strong base) and Ultra Clean. This is a quadruple whammy for removing hair drug residues.

Cosmetic treatments can have one downside. If you breach or perm, hair becomes more absorbent, so if you take a drug like codeine, it may be incorporated into the hair immediately from sweat, where normally it would take 5 to 7 days. Therefore, don’t do any drugs the day of the test assuming it won’t be detectable for a week.[3]

Aloe Toxin Rid Shampoo now comes in a bottle that looks like the original green ‘Old Style’ bottle. It identifies Testclear as the manufacturer. It contains 5 oz of shampoo. It costs $ 200 to $ 235. It is likely the most expensive shampoo in existence and one of the most expensive liquids (molten precious metals aside).

How to use Aloe Rid Shampoo

Disclaimer: Neither the writer nor Leaf Expert / FV Kasa can recommend any of these methods. We did not invent them. We are merely describing methods that the online community believes work and which have some scientific backing. Use it at your own risk. We can say we believe the Jerry G Method to be a safer method as it merely involves bleaching and dyeing the hair twice, 10 days apart. Many people already have experienced bleaching and dyeing the hair for more than one application.

The Macujo Method is the fastest. You only really need two days. However, it may be riskier. It tells you to put ingredients in your hair, like Acne Wash and detergent which do not belong in the hair or on the scalp. Make sure you use petroleum jelly on your hairline and take all the precautions mentioned above to protect your skin and eyes. Use gloves on your hands. If you are uncomfortable with any step or it causes pain, you should abort the process. Your health is more important than passing your drug test. It is often advised to never show up to a drug test you are going to fail. A refused test is better than a failed test.

Jerry G’s approach is far safer and more logical. Many of us have bleach and dyed our hair before, while few people have washed their hair with detergent or acne wash. If you know how to bleach and dye your hair and how your skin and hair react already, you’re likely going to be good to go. Just bleach and dye 10 days before the test, then also on the day before the test, and use your detox shampoos. All the ingredients are meant to be used on the hair. This method also has scientific backing as we explained in previous sections.

Both methods are claimed to have been developed by users on weed discussion forums. This is likely considering the original Aloe Rid was sold by Nexxus, owned by a giant corporation that discontinued the product. It is possible however that both detox shampoos were snuck into the final formula for both methods mostly in order to sell Old Style Aloe Toxin rid for $ 200. If you can’t afford it, just get an extra bottle of Ultra Clean and use that instead. If you can’t afford that, just use a good shampoo and do the Jerry G Method since bleaching and dyeing alone are proven to remove drug residues.

Lastly, everything that has touched your untreated hair needs to be quarantined, including old combs, pill cases, hair ties and bows, and hats. These can cause old drug residues to be introduced into the hair again.

Your workplace may request a hair follicle test to screen for illicit drug use before hire or randomly during employment. Some research also indicates that hair drug testing can be useful for monitoring drug use in at-risk individuals when used alongside self-reporting.

Old Style Aloe Rid may not be everywhere sold explicitly to beat hair lab tests for drugs in the body of your hair, as such a claim could make it illegal in some states. Before you purchase the product make sure it is not illegal in your state by being sure there are no explicit references to its use as a detox shampoo to beat a drug test on your packaging.

Do not use it if you have a sensitive scalp or are allergic to any of the ingredients.  Do not attempt to use this product to detox drugs from your hair if you are under 18, pregnant, or nursing, or if it is illegal to use a detox product in your jurisdiction.

If you are allergic to other shampoos, you could be allergic to this one. If you are under 18 years old, don’t purchase from a site affiliated with illicit drug detox products as many of these types of sites require you to be 18 or older to purchase. Don’t use it if pregnant or nursing a baby. Don’t use it if it is illegal to purchase or possess this product in your jurisdiction.

If you experience scalp irritation from Old Style Aloe Toxin Rid, read the box for instructions on who to contact. Cease use if you have a bad reaction.

To pass a saliva test: 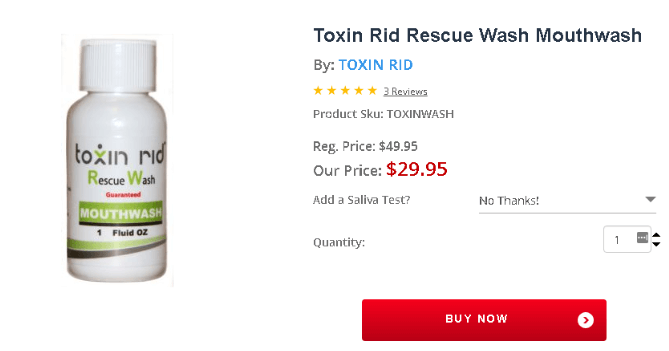 Toxin Rid mouthwash may help you pass a saliva test.  It can cost you about 30 bucks on testclear.com

Toxin Rid is a seller of Old Style Aloe Rid. It’s not clear the company’s relationship with testclear.com as they sell their own line of products, one of which is Toxin Rid Rescue Wash. Many use this product to help them pass a saliva drug test. If you cannot afford this product, a regular peroxide mouthwash will give you a great chance of passing a saliva drug test.

To pass a urine drug test: 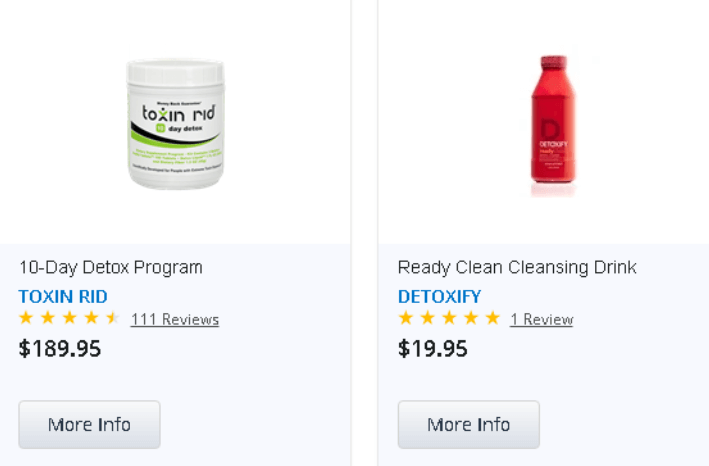 Testclear.com sells a wide range of products to beat a urine test, including dilution detox drinks like Ready Clean,  supplements aimed at actually detoxing rather than diluting drug residues like Toxin Rid, and urine delivery kits worn to surreptitiously deposit urine substitutes into a collection receptacle.

Pros and cons of Aloe Rid Shampoo for THC Detox

Q:  How long does it last?
A: It will continue to work until 5 to 7 days after you resume drug use.

Q:  Aloe Rid detox shampoo near me? Where to buy Aloe Rid Shampoo?
A:  Buy it on the producer’s website: https://www.testclear.com/Old-Style-Aloe-Toxin-Rid-Shampoo-P174.aspx

Q:  With opiates and for alcohol can it work?
A: Studies show the Jerry G Method with a shampoo will take opiates out of the hair. It should also work for alcohol.

Q:  Can lab tests for probation reveal it is detectable?
A:  Using a shampoo with no adulterants is not detectable by a drug test.

Old Style Aloe Toxin Rid is the most popular detox shampoo. It has a high chance of helping to get drug residues out of the hair if used with the Jerry G Method (bleaching and dyeing). It appears to have medium credibility online.

The price is the biggest drawback of this product. There do not appear to be any special ingredients to warrant the price. But, if you can afford it and need the added confidence of a high price, it may be worth the trouble.